Raisah is a Scottish Asian Muslim Writer/Director based in Glasgow, Scotland with two features in development, with the Scottish Film Talent Network and Film4.

She entered the industry through an apprenticeship scheme called Second Light, run by First Light and supported by Creative Scotland, Pinewood Studios and Barbara Broccoli. Her first short as writer ‘Last Order’, 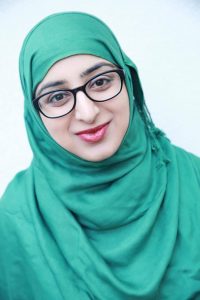 was commissioned through Second Light, her first short as writer/director, ‘Meet Me By The Water’, was commissioned by the Scottish Film Talent Network as part of New Talent Shorts 2015 and premiered in competition at the Edinburgh International Film Festival 2016. The Feature Script for ‘Meet Me By The Water’ was developed through Screenwriting residencies with Playwrights Studio Scotland and Binger Labs Amsterdam in 2011, under mentorship of Olivia Stewart, it was shortlisted for the Sundance Writers Lab 2015. Her first film as a writer/director, Magda, premiered in competition at the Glasgow Short Film Festival 2015.

She is alumni of the EIFF Talent Lab 2014 and a Creative Scotland Artists Bursary awardee for the development of her second feature script ‘Safar’, a female road trip film about two sisters that drive their elderly Gran from Scotland to Pakistan. Safar went on to be shortlisted for the Sundance Writers Lab 2018 and is currently in development with Producer Zorana Piggott and  the Scottish Film Talent Network.

Her third feature script ‘Half-Moon Camp’, a WW1 film set in a German prisoner of war camp for Muslim prisoners, has been developed through the Adapt to Film scheme run by Broadway Cinema Nottingham, Skillset & The BFI and is currently in development with producer Zorana Piggott and Film4.

As well as her feature projects she is currently working on ‘Tightrope’, an art installation, that has been developed through the B3 Media Talent Lab. She is also developing a new short film as writer/director – Last Story – a dystopian tale of a dying world in a which a couple struggle with an unplanned pregnancy.

Raisah is interested in both strong character led films with interesting BAME female protagonists and stories that reveal hidden histories. Her dream is to one day write and direct the Lois Lane movie, with a woman of colour in the lead role.

You can follow her on twitter or send her an e-mail to stay up to date and find out more.